One of the most common afflictions in modern life is sinusitis, with tens of millions of Americans suffering every year. It appears that the incidence of sinusitis, like that of the related disease asthma, is increasing dramatically at an alarming rate and calls for more attention. Appropriate therapy can greatly reduce the symptoms and frequency of sinus attacks in the great majority of sufferers.

Sinuses are air-filled chambers around the nose. Typically, humans have 4 pairs of sinuses around the eyes that are connected to the nose.  The reason why humans have sinuses is not scientifically proven but the hypotheses are that sinuses are there to lighten the weight of our skull or to protect other important structures from trauma as a buffer to mechanical impact. 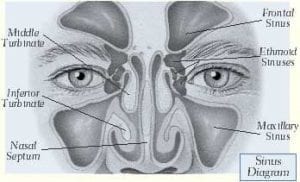 The maxillary sinuses are behind the cheekbones, and are the most well-known sinuses. The ethmoid sinuses are between the eyes and eye-sockets in the middle of the face. The sphenoid sinuses are at the back of the nose, behind the eye sockets, nearly in the center of the head. All sinuses are connected to the nose via small openings called “ostia,” and have skin lining inside called, “mucosa”. The sinus mucosa has thousands of hair-like structures called cilia, which sweeps the mucus produced by the sinuses out into the nasal passages and to the throat where it is swallowed. Typically, humans will produce about a quart and a half of thin watery mucus everyday. This process is usually not noticed unless the mucosa becomes thickened or infected. The constant flow of mucus sweeps the bacteria and dust particles out of the sinus, keeping the sinuses clean and sterile. The openings to the sinuses or “ostia” are very small, and problems occur when the mucosa linings of the openings thicken to the point of blocking the opening. When this occurs, mucus and bacteria are trapped in the sinuses and an infection starts. The infection will lead to more swelling and may turn into a negative cycle that exacerbates over time. Most of the sinuses drain out through the small area behind the middle turbinate. The openings can also become blocked if the middle turbinate is too large or pushed to the side to the opening by a deviated septum. 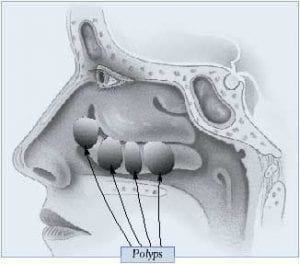 In some patients, the mucosa will swell up so much that it will hang down in large folds or bags of tissue. These are called polyps. Nasal and sinus polyps are rarely actual growths, and thus are almost never cancerous or malignant. Polyps contribute to sinus problems by either blocking the openings into the sinuses, thus worsening the cycle of infection, or by being large enough to block the nasal airway.

What is a Sinusitis?

When there is a significant swelling in the nose from various reasons such as allergy or cold, this swelling causes the obstruction of the “ostia” (opening between the nose and the sinuse), and this converts the sinuses into a more favorable environment for the infection by bacteria or viruses.  Inflammation or infection limited inside the nose or nasal cavity is called “rhinitis”, and when the inflammation/infection spreads to the surrounding sinuses, it is called “sinusitis.”

Difference between cold and sinus infection:

The common causes of sinusitis are cold and allergies.  Sinusitis can often start with cold, a viral infection, but later also become a bacterial infection.  If you have had cold symptoms for more than a week, you should suspect a bacterial sinus infection because a common cold symptoms caused by virus typically resolve within a week period.

Difference between allergy and sinusitis:

Typical allergy symptoms are sneezing, itchy eyes/nose/throat, stuffy nose, and clear nasal discharge.  When you develop colored runny nose, headache or coughing of thick mucus, then chances are that your allergy or simple cold has escalated into sinusitis, and you consult a specialist for the treatment.

Again, typical symptoms of sinusitis are colored nasal discharge, thick post nasal drip, pressure-like headache, and stuffy nose.  But other more advanced symptoms of sinusitis include ear clogging (as if riding an airplane), throat discomfort, coughing, and post-nasal drip.  These symptoms indicate that the infection in the nose and sinuses has spread and affecting surrounding structures such as ears and throat.

ENT specialists have a tool called endoscope that allows the examination of the deeper portion of the nose without discomfort or pain that aids the definitive diagnosis of sinusitis.  Cat scan of the sinuses done in a radiologist’s office can also help to check the presence of chronic sinusitis. Cat scan of the sinuses are quick and does not involve sometimes claustrophobic experience of MRI. 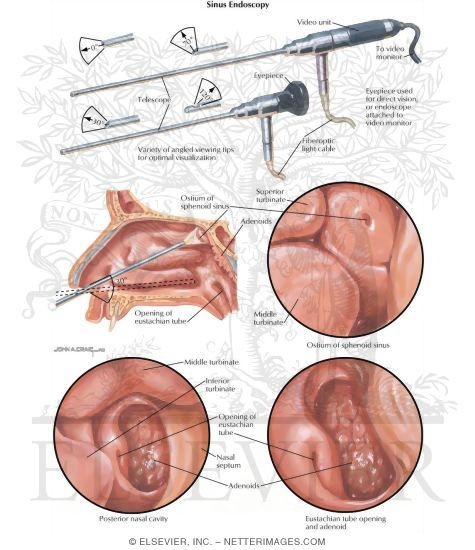 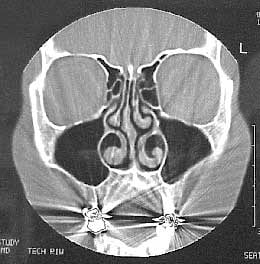 The goal of medical treatment for nasal and sinus problems is to prevent or reverse abnormal swelling of the mucosa and eliminate infection.

Nasal steroids (Rhinocort Aqua®, Nasacort®, Flonase®, Nasonex® and others) are medicines that are sprayed into the nose. They will shrink swelling from any cause, and are safe for long-term use. Steroids (prednisone, Medrol®, and others) may also be taken by mouth. These drugs may dramatically shrink swollen tissues, but are not suitable for prolonged use because of serious side effects.

Antihistamines, either orally (Allegra®, Claritin®, Clarinex®, Zyrtec®, Benadryl®, and others) or sprayed into the nose (Astelin) will help prevent swelling due to allergies.

Over-the-counter 12-hour nose sprays such as Afrin® or Dristan® will shrink the turbinates well, but are only safe to use for a very short time. Prolonged use will lead to rebound swelling that will lead to dependency on the sprays and complete obstruction of breathing if they are withdrawn. We usually only use these in very short-term situations, such as around the time of surgery, or before airplane flights, or sometimes right at the start of treatment for an infection.

A large range of antibiotics are available, and are very helpful in fighting sinus infections. These are frequently most effective when used in combination with some of the other treatments. A several-week course is needed for severe or chronic infection.

Salt water (saline) rinses are useful for washing thick or infected mucous out of the nose. Normally, almost none of a saline rinse actually gets into the sinuses.

Allergy testing is very useful for treatment planning. Between one-third and one-half of all people will have some degree of allergy, and the proportion is higher in those with chronic sinusitis.

The goal of surgery is to reduce sinus infections, pain or pressure. The sinus openings are made large enough that they will remain open.

Infected mucous or diseased mucosa can then be cleaned out. The majority of sinus patients will require septoplasty, turbinectomy, or spreader grafting along with the sinus operation.

Most sinus surgery is done using endoscopes, special surgical telescopes that allow the surgeon to see into the nose and make fine alterations in the anatomy. This technology allows almost all sinus surgery to be done through the nostrils. It brings about quicker recovery and less pain and bleeding than the older methods, and is very safe.

Surgery today is usually done under general anesthesia, meaning that the patient is completely asleep for the procedure. Patients who are otherwise healthy can usually go home the same day, and be back at work within a week. People who do heavy lifting in their jobs will need to be off work longer.

Surgery to improve breathing can consist of straightening the septum (septoplasty), reducing the size of the turbinates (turbinectomy), or enlarging the openings of the nose with spreader grafts.

Septoplasty is done by raising the mucosa off of the cartilage and bone of the septum, and then removing the portions that are crooked or out of alignment. The cartilage removed can be re-shaped and replaced, or discarded if not needed for support.

Spreader grafts involve placing tissue harvested from other parts within the nose to enhance the airway and prevent collapse.

Turbinates can be reduced by literally trimming them with special scissors, cauterizing (burning) the mucosa to cause it to shrink, freezing the mucosa (cryotherapy), or radiofrequency treatments. 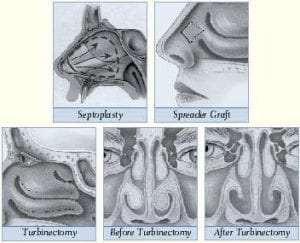